This post is all about my first time in Asia, Hong Kong to be specific!  Technically we spent 4 days in Hong Kong, but since we flew in so late the first day and flew out in the morning of the fourth day they don\’t really count.  This is honestly a city I never thought I would see because it was so far and I just didn\’t really think of China as the top of my travelling list.  Since we had to have a layover there anyway, we figured we should see it in case we didn\’t make it back to the area.  This was such a great decision because it changed my whole perception on Asia.  In two short days we saw an area we had no idea about and as it turned out; Hong Kong is not an intimidating place, it\’s quite easy to navigate and really a fun place to wander around!

The harbor view from our room at the Conrad Hilton

On day one we set out to see the Tian Tan Buddha statue on Lantau Island.  While it may have been easier to hire a tour, we like to do things on our own so that we can make our own time frame and get sidetracked if we want to.  With that in mind, we Googled for a while and discovered we could take the metro the majority of the way and then take the cable cars up the mountain.  We were staying at the Conrad Hilton so the closest metro station was Admiralty.  We went there (about a 10 minute walk) and bought passes to Tung Chung Station.  We used the customer service booth to purchase our passes because we had larger bills than the machines would take. 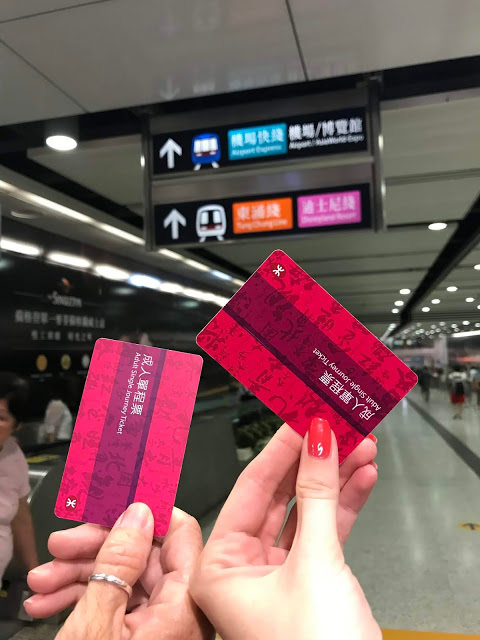 Once in Admiralty Station I was shocked to see there were so many shops and restaurants, it was nothing like the subways I have seen before.  We boarded a train to Central Station because that\’s where the lines change.  We then got on a train to Tung Chung Station.  This is also how you would get to Hong Kong Disneyland we soon learned, it\’s the stop right before Tung Chung Station.  This was so easy to figure out, even considering we don\’t regularly use metros.  It also was very cost effective because it was about $50 HKD round trip per person from Admiralty to Tung Chung.  I would say in all the trip took about 45 minutes-1 hour.

Once we arrived at Tung Chung Station we walked out and straight across the open area, there were plenty of signs to follow, to the Ngong Ping Cable Cars.  We read this was the most scenic way to see Hong Kong, while getting to the Buddha statue.  The tickets were $210 HKD per person for a round trip standard cabin, there was no way either of us was getting into the crystal cabin that featured a glass floor!!  The line was minimal and we were actually in a car with only two other people.

The views were truly amazing!  Even me, who hates heights, was okay on it.  You got to see the whole skyline of apartments that were next to the water, the airport, the mountain area of Lantau, and a view of the Buddha.  It was absolutely worth it and the cabin was comfortable.  The Buddha looked huge even from the cable cars.

We got off and started towards the statue, first buying some ice cream of course.  Side note: the limited edition Haagen Dazs Lavender & Blueberry flavor is delicious!!  The area did have a lot of tourists, but it didn\’t feel packed.  The only time I really felt frustrated was when I wanted a picture without people in it, but honestly if you\’re patient and can wait a few minutes it\’s possible.  I think this was the lesson Buddha had for me while I was there because as soon as I started to be patient and not annoyed by the people, I was able to take some great photos without any tourists in them!  Once we had spent the time we wanted to walking around, we got back on the cable cars and did the exact reverse route on the metro to get back to our hotel.  A note about the metro passes: once you\’ve arrived to your last station and are leaving, you don\’t scan your pass anymore, instead you insert it into a blue card slot on the turn-styles. 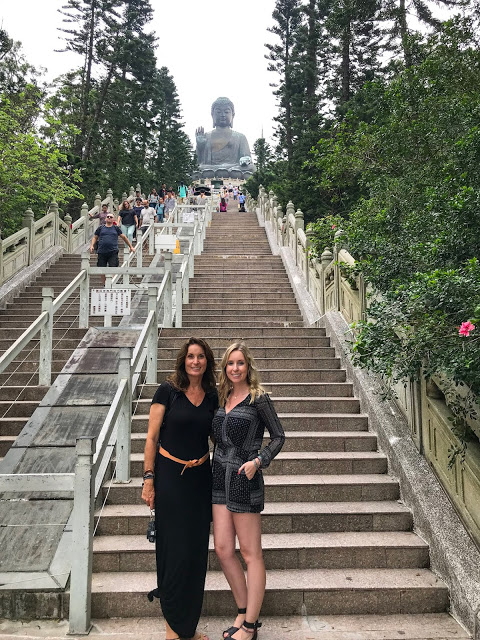 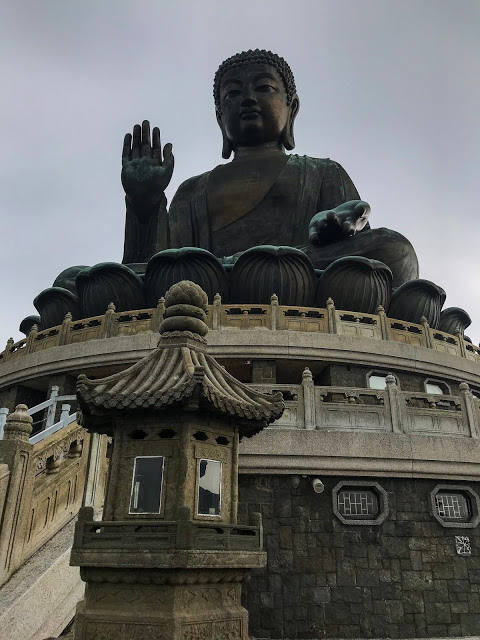 Going to the Tian Tan Buddha statue did take most of the day, but it was completely worth it.  It is incredible to see in person and the whole area is beautiful.  It is a different side to Hong Kong\’s bustling city.  The only thing I would change is to spend some time seeing the fishing villages on Lantau while we were there.

On our second day we decided to stay in the city and venture to the Sheung Wan Market area.  This was also easily accessed through the metro fortunately!  We took the metro from Admiralty to Sheung Wan for $9 HKD round trip per person.  We used the machines to buy our tickets this time since we had smaller bills now and it was very simple.  You just click the area on the map you want to go to and it gives you the price and you insert your money, then a pass comes out in the bottom.

The Sheung Wan area was really great to go to because it not only has the Sheung Wan Market, it also has the Cat Street Market, the Western Market, the Graham Street Market, and Hollywood Road all within walking distance.  We started at the Sheung Wan Market, which is actually in what looks like an office building.  It has multiple levels; the bottom is fish and poultry, the 2nd is veggies, fruits, and other meats, and the 3rd is a food court area.  I really enjoyed seeing it, though some people may want to skip the meat and fish areas because they do have very strong smells.  Everything looked so fresh and there were a lot of people shopping for things. 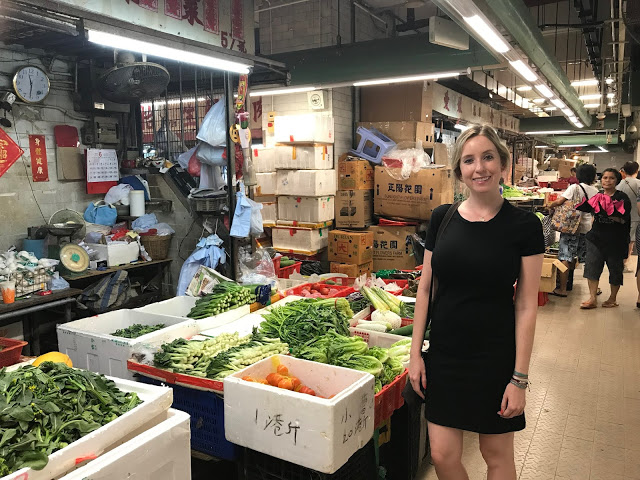 Dress | Bag (aka the best travel purse ever!)

The next place we went to was Hollywood Road.  On the way there we stopped at Oddies Foodies to try one of the famous eggette sundaes, it was worth every bite.  I got the Night Wolf, which featured chocolate and vanilla gelato, passion fruit panna cotta, brownie chocolate chip eggettes, and crunchy flakes (YUM, right??).  Hollywood Road has lots of different shops and restaurants, but we decided to skip that and go to the Graham Street Market.  This market was also mostly produce, but located on a sidewalk area.

After looking at the produce we headed back towards the metro station to see the Cat Street Market.  This market was fun because it had a lot of trinkets to look at, from hair sticks to bronze mementos.  This would be the place I would recommend to pick up your souvenirs!

Our last stop was at the Western Market.  This was indoors, a great relief since it was a little warm that day!  The building itself was beautiful to see, but aside from that there was only a few stores and a few restaurants inside.  If it\’s out of your way, I would say it\’s okay to not see it.

The Western Market is about a 6 minute walk from the Sheung Wan Station so we headed there and back to the hotel.  We stopped by the Pacific Place Shopping Center since it was right next to Admiralty Station.  It is filled with basically every high end designer to exist; from Hermes to Dior to Chanel, it had them all.  It was fun to window shop, but we didn\’t buy anything except some French macaroons.  It was very convenient though because there is a direct entrance to the Conrad Hilton from the Pacific Place Center.

Once we were back in our room it was still early afternoon, so we decided last minute to book an evening harbor cruise on one of the traditional Chinese junk boats.  They looked so beautiful, we just couldn\’t resist!  There was availability for the 5:30pm cruise for $220 HKD per person so we did that.  We chose to depart from Central Pier 9.  On the website it notes that any cruises leaving at a time ending in 45 (3:45 for example) would drop you off at a different location than where you embarked, a spot across the harbor to be exact, so keep that in mind if you book one!  Central Pier 9 was only a 25-30 minute walk from the Conrad Hilton, the other option Tsim Sha Tsui Pier 1 is directly across the harbor and would\’ve required a taxi or to take the metro.  I figured this all out using Google Maps, so it\’s easy to check but be sure you do!

Tamar Park on the Harbor, between our hotel and the pier.  It was so beautiful and had lots of people.

The junk boat looked like it was right out a movie, with big red sails and old looking wood accents, and lounge seats on the top deck.  We were the first group picked up so the boat was completely empty and we got to choose a comfy seat.  Next we went across the harbor to pick up the 5:45pm group, they got seats mostly on the lower deck area.  Then we spent a little over 45 minutes going around Victoria Harbour, the skylines were amazing and it was very nice to be on the water.  Our cruise included one drink and they were very willing to take photos for us.  It was a really nice way to end the day. 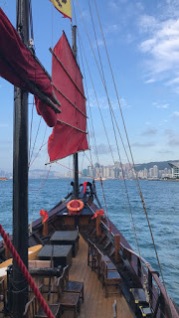 We originally were picked up from the airport in a hotel car, but on our trip back to the airport we decided to use the Airport Express because it was supposed to be much faster and cheaper.  We found out there was a free shuttle to Hong Kong Station just outside the top level of the Pacific Place Center, it stopped at most hotels in the area.  At Hong Kong Station we bought passes for the Airport Express for $215 HKD each.  We even had the option to check our bags at airport kiosks before we got to the airport.  The ride from Hong Kong Station to the airport was about 35 minutes, much quicker than the 45 minutes it took our car the first time.  I highly, highly, highly suggest doing the airport express to Hong Kong Station and then taking a car from there when you arrive to save some money, and to do the same when you leave!  It really is the most efficient option and even with luggage it\’s totally doable.
I feel like we got to see so many sides of Hong Kong in such a short period of time.  I don\’t think there was anything I wanted to see that we didn\’t.  Overall, I expected to not like Hong Kong because it seems so packed with people and like they wouldn\’t be nice.  Our experience was completely different; people were very helpful, all the signs were in Chinese & English, and the city itself never made me feel scared.  I never thought I would even go to Asia, now I would love to go back and see more areas and I will be highly recommending Hong Kong to everyone!