Lately I\’ve been reminiscing a lot on my time at the University of Arizona since I graduated about a month ago!  The past four years flew by and I feel like I\’ve grown so much, experienced so many new things & met amazing people.  I was always one of those people that said \”I never want to graduate\” and it was so true, the thought of leaving Tucson & campus made me so sad!!  But I\’m also excited to go out and see what the future has in store for the next four years, too!  The U of A was like it\’s own little world, want to walk around in a bikini?  No one cares.  Want to have a marg at 10am?  Better hurry, Pete\’s is probably packed already.  It\’s a crazy, fun place and honestly the best university in the nation (not that I\’m bias or anything).  In honor of graduating, let\’s take a trip down memory lane and see the top 5 things I learned in the past 4 years (it was so tough to narrow it down from all the things I\’ve learned!).

1.  Choose a major you\’re really passionate about.  Yes, making money and having a stable career is important, but when you\’re stressing about an exam thinking about that isn\’t what\’s going to get you through it.  College can be really hard at times and pushing yourself for something you don\’t care about will make it that much worse.  If you aren\’t sure in the beginning what you want to pursue, it\’s okay to just take the general requirements for the first year and try out different things to narrow it down!

2.  Branch out and do new things.  Join that club you saw a flyer about, go to the free events (usually they have free food anyway), and don\’t immediately disregard any opportunities because you never know you might end up discovering new interests.  I tried to take advantage of everything I saw and I think it really helped me have a well rounded experience and not feel like I missed anything.
3.  Find a way to balance yourself and your schoolwork.  Studying is obviously important, but so are you!  Maybe venture out to the gym and take breaks when you need it.  If a bunch of people are going out to eat, take some time to join them!  Networking is a huge part of college, too and it\’ll help you create your home on campus!

4.  You\’ll find your place eventually.  I know everyone says that and it\’s so cliche, but it\’s really true.  I went into U of A thinking you had to be in a Panhellenic sorority or your life was just really boring and I was terrified when I realized I didn\’t actually like it during recruitment, but I found my people and an organization I love more than I ever expected to!  So just because what you had planned doesn\’t work out, that doesn\’t mean something even better won\’t come in its place.
5.  Those four years are some of the fastest and most fun years of your life so take advantage of them, don\’t just let them go by!  I didn\’t think it was true until suddenly I was counting down less than 10 days left and realized I was really almost done.  Even with everything I did I still feel like I missed out on things, this just goes to show how much there is to experience in such a short time. 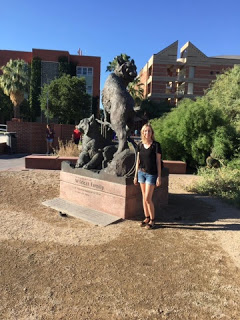